In 2007, ChangSha XiMai led by Mario settled in Changsha, hence becoming one of the first foreign-invested enterprises in Changsha Economic and Technological Development Zone, mainly engaged in the development and production of automobile internal combustion engine components and transmissions. “This gives me the opportunity to experience the thoughtful and warm services from Changsha government departments, and to witness the ‘China Speed’,” said Mario.

Mario worked in Shanghai for several years before coming to Changsha. In early 2007, CMD and Marval (Italian companies) hoped to invest in China and then found him. Although Mario first considered settling in some coastal cities, he finally chose Changsha.

“The cost of building a factory in Changsha was lower, which could attract a large number of mature and stable labor force. Changsha also provided very preferential policies for investment and specific plans for industrial development,” said Mario.

It took only about half a year, with the help from the Changsha government departments, to pick the location, get a business license, set up all the equipment from across the sea, and recruit workers. “For enterprises, time is money. Such working efficiency was unprecedented in my career, which also strengthened our parent companies’ confidence in investing in Changsha,” said Mario. 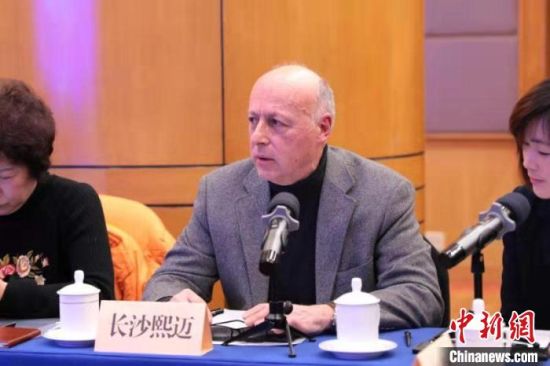 Mario Pastore at the meeting for foreign-invested companies in Changsha. [Photo/ ChangSha XiMai]

To his surprise, such “speed” is common in China. Along with the rapid development of China, ChangSha XiMai has also grown fast from a team of a bit more than 20 people to over 400 people now, and the enterprise turnover has also increased nearly 20 times. “Extraordinary speed!” said Mario.

The rapid development also brings more challenges to enterprise executives. “The Chinese market is changing rapidly; customers' requirements for product performance keep improving; and foreign-invested enterprises must constantly update to meet the market demand,” said Mario. Facing the challenges, Mario has his own business rules. He believes that learning Chinese culture, following the trend of China's development and integrating into the Chinese market are the “Chinese style” that foreign-invested enterprises should have.

Mario appreciates and respects Chinese culture, which can be seen from the name of the company ― XiMai, a “very Chinese name” in Mario’s words. In his opinion, Chinese culture has a long origin. Sharing the same cultural background, Chinese employees are very good at working together towards the same goal. The application of Chinese culture to management has also brought a lot of benefits to his company.

Mario said that Chinese team spirit and rule consciousness were fully reflected during the COVID-19 pandemic. Despite the outbreak in early 2020, XiMai fully recovered its production capacity in April or May. Thanks to the effective epidemic prevention and control measures in China, XiMai managed to the secure the factory supply chain and stable development.

At the beginning, XiMai’s raw materials were completely imported, but now 99% of the raw materials are produced in China. XiMai’s products used to be 100% exported, but now Chinese market sales weigh just as much as that of overseas market. Chinese enterprises including Saic Fiat Powertrain Hongyan Co., Ltd. (SFH) and SANY have become XiMai’s customers. In Mario's opinion, XiMai is now completely a “made-in-China” company.

Mario told CNS that as the Chinese economy continues to grow steadily, XiMai’s focus will be more inclined to the Chinese market, especially after the COVID-19 pandemic. Now, following the transformation and upgrading of manufacturing industry in China, XiMai’s robot workshop is ready to be put to use. Boasting new materials, new processes and new equipment, XiMai will present high quality products as well as a brand-new image of “made in China”.

With his busy schedule, Mario, who is nearly 70, returns home in Italy almost once every two years. But Changsha has already assured him with a sense of home. On March 29, 2018, Mario obtained the permanent residence permit and hence became an official resident of Changsha.

During his stay in Changsha for more than a decade, Mario has witnessed the increasing number of modern high-rises and improved transportation system, while working out in the fitness centers and parks that can be found at every corner of the city. “Changsha has become a bigger city and a more comfortable home. While we work hard, we can also enjoy a comfortable life in here,” said Mario.

After work, Mario likes to appreciate the scenery of Hunan on his bike. He has left his footprints in famous scenic spots such as Zhangjiajie and Fenghuang Ancient Town, as well as the old streets and alleys in Changsha. Also recorded in Mario’s paintings, the pile dwellings in western Hunan, the old roads paved with rough limestone and the smile of young people are the most beautiful scenery of Hunan in his memory.