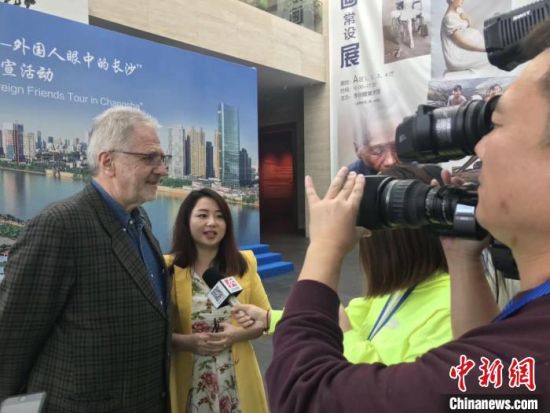 “When I first came to China, there was only one small airport in Beijing. Now, not only does Beijing have several large international airports, but there are also many flights from other Chinese cities to all over the world. For example, Changsha airport has more than 40 international and regional flights,” said Hans Georg Ackermann from Bavaria, Germany. He also said in an exclusive interview that China has been more opening up and connected to the world, and is good at using resources from all over the world for its development.

Hans Georg Ackermann, 73, the former president of Siemens Greater China, is now a business consultant for the Management Committee of the Changsha High-tech Industrial Development Zone and Changsha Municipal People's Government, and has worked and lived in Changsha (capital city of Hunan, China) for 15 years. Wearing a light-colored shirt and jeans, Hans appears to be in high spirits, whose overall look is stylish and clean with gray beard and hair.

Ackermann boasts strong global business networking and working experience in a Fortune 500 company. With these advantages, he was appointed by the Management Committee of the Changsha High-tech Industrial Development Zone as a business consultant. “I accepted the appointment letter as a business consultant, but I don't want to be paid. My services are free,” said Ackermann, who lives on a pension now. He added that he received a lot of help from Chinese people during his tenure in China and fell in love with the country, so he wanted to make contributions to accelerating China's internationalization in return with his experience and expertise.

As soon as he took office, Ackermann proposed to establish an international business platform, as a bridge between Changsha and foreign enterprises and government departments, and to promote business exchanges and cooperation of technology between Changsha and the world. “There is a proverb in my hometown: To dance, you need a dance floor. A country or city needs a 'dance floor' as the attraction for you to stay,” said Ackermann. He believes that only when more and more foreign companies and institutions come to China will the city accelerate its internationalization.

Since Changsha International Science and Technology Business Platform was put into use in 2015, it has attracted dozens of representative offices, chambers of commerce and associations from countries including Japan, South Korea, Russia, Israel, India, Sweden, Malaysia, Thailand, Spain, Saudi Arabia, Algeria, as well as regions including Hong Kong, Macao and Taiwan; completed over 800 receptions or consultations both at home and abroad; organized or participated in more than 30 overseas business trips; and helped more than 100 Chinese enterprises go global.

“The platform has become an important channel to attract foreign investment, to solve the language and communication problems for foreign enterprises and personnel to invest and work in Changsha, and provide strong assurance,” said Ackermann, who did not only play a big part in preparing and establishing the platform, but also helped introduce foreign enterprises to visit and invest in China.

When the COVID-19 pandemic broke out, Ackermann volunteered to voice his support for China's anti-epidemic measures via media, posted what he knew about the real situation in China on social media such as WeChat moments, and called on foreigners in China not to believe or spread rumors. He also appealed to the Siemens team to collect various epidemic prevention materials for China, and contacted his son, who works in the medical department of Siemens in Germany, to organize the donation of 100,000 masks to Wuhan. In cooperation with the Management Committee of the Changsha High-tech Industrial Development Zone, more than 400,000 sets of epidemic prevention materials were put in place and 800,000 medical face masks have been donated to more than 30 countries.

“China is my second home, and I plan to mobilize some foreigners in other Chinese cities to also set up international business platforms, so as to help the opening-up and internationalization of China,” said Ackermann, who has changed the permanent residence on his passport to “Changsha, China”. He is also promoting the German dual education system in China, training skilled workers who can better adapt to Industry 4.0, and contributing to the improvement of China's industrial quality and industrial transformation and upgrading.

The vibrant and open economy makes Changsha an “international city”. According to the statistics of Changsha Municipal Bureau of Commerce, as of March this year, there were 1,110 foreign invested enterprises in Changsha, up 26.4% year on year; 173 Fortune Global 500 enterprises have settled in Changsha, including 99 from overseas.