“The initial exchanges between China and Japan were mainly official, high-level or for trade purposes. Now, bilateral economic, trade and cultural exchanges, as well as overseas studies and travels are steadily developing. Non-governmental exchanges have become the mainstream,” said Dai Ogino (荻野大), friendly envoy of China-Japan international business cooperation. He added that in the new era, both sides should explore new ways, expand new channels, hence deepen people-to-people exchanges from heart to heart. 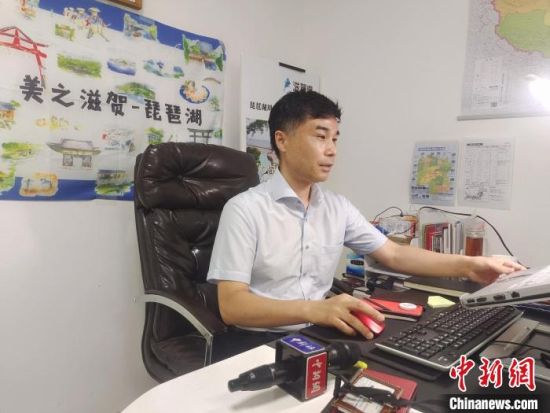 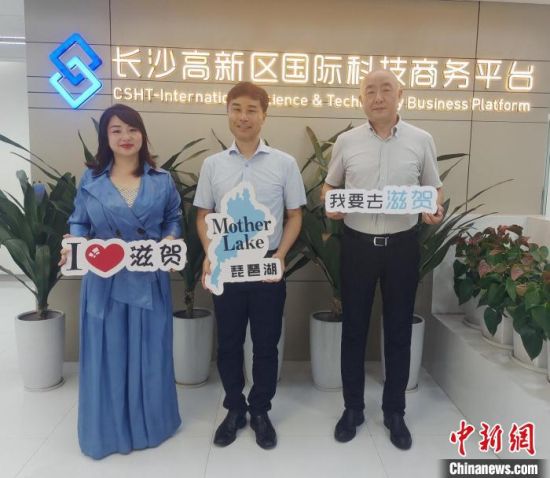 Dai Ogino and his friends introduce Shiga Prefecture of Japan.

Hunan Province of China and Shiga Prefecture of Japan signed an agreement on friendly relations because of two lakes- Lake Dongting of Hunan and Lake Biwa of Shiga. The two sides have cooperated for nearly 40 years, with deep-rooted friendship and fruitful exchanges and cooperation in the fields of economy, science and technology, education, culture, environmental protection, sports, tourism, young people and so. Shiga has become one of the most active sister prefectures for exchange and cooperation with Hunan.

In order to further deepen the exchanges and cooperation between the two sides, in 2019, Shiga Prefecture set up Hunan Representative Office of Lake Biwa Tourism Promotion Association (Japan) on the International Science & Technology Business Platform of Changsha High-tech Industrial Development Zone, and Ogino was appointed the first director.

As a new comer to Hunan, Ogino was unfamiliar with the local environment. In order to promote his hometown and propel exchanges between Shiga and Hunan in various fields, Ogino volunteered to visit associations of agriculture, culture, tourism and etc., for the purpose of cooperation in economy, trade, agriculture, tourism, environmental protection and so.

Having lived in Hunan for more than two years, this Japanese civil servant who likes Chinese culture also falls in love with the local spicy food, whose favorite dish is stir-fried bacon with dried radish. He can sing “Liuyang River” (a local ode to the mother river of Changsha) and has also witnessed the changes in the city. “The city infrastructure is developing rapidly, with the internationalized construction of Xiang River Scenic Belt and urban lighting. Changsha is a vibrant city,” said Ogino, who praised Hunan for its openness and warm services.

“During my promotion of Shiga, not only did I receive support from offices at all levels including foreign and overseas Chinese affairs, business, science and technology, etc., but the Foreign Enterprise Service Center of Changsha High-tech Industrial Development Zone also provided warm services to new comers from abroad. All this makes me want to stay in Changsha forever,” said Ogino. At each promotion meeting, Ogino never hesitates to share these true feelings with Japanese enterprises, associations and experts.

He also participated in the activities of various China- Japan cultural exchange organizations, in which he recommended Shiga products in Chinese. “Now, I have hundreds of Chinese friends on WeChat. They are warm-hearted and friendly. They often host some private fashion-leading parties and club activities, and invite me to introduce Shiga specialties such as sake. Some Chinese friends also help me sell goods on live stream,” said Ogino. He and his colleagues also set up a WeChat account called “Beautiful Shiga”, which posts every week introductions of Shiga’s food, Buddhist specialties and tourist products to Chinese netizens.

Ogino’s office, a 50 m2 room, is like a “Shiga Pavilion”, which displays Shiga's specialties such as Hikonyan, sake, Shigaraki wares, and Buddhist works of art; Shiga maps and Japanese brochures about Shiga food, tourism, industry, education, etc.; and a hand-written message from the Governor of Shiga: Focus on the big picture; start with the little thing.

“I brought these from Shiga. They are the ’magic tricks' for promoting my hometown in China,” said Ogino. Japan and China have written a touching story of “Despite the different mountains or rivers we are at, we share the same moon when we look up to the sky” when fighting against the COVID-19 pandemic hand in hand. China-Japan relationship is ushering in a new historic stage, and there needs to be more substantial and new ways of cultural exchanges between the two countries.

“Lake Biwa of Shiga is the largest freshwater lake in Japan. In the 1960s and 1970s, Lake Biwa had been flooded and polluted, but later became a famous tourist attraction after treatment. We are sharing relevant water treatment experience with environmental protection departments and enterprises of Hunan, so as to promote the exchange of technologies and personnel in the field of environmental protection,” Ogino added that Shiga is an advanced prefecture in terms of social welfare in Japan, and he is also promoting the exchange of nursing talents between the two countries.

“Through the joint efforts of the two governments, I plan to send nursing students from Hunan to relevant elderly care institutions in Shiga for internship and studies. After they acquire skills and advanced concepts, they can improve the overall elderly care industry in China when they return,” said Ogino.

Since the establishment of the Hunan Representative Office of Lake Biwa Tourism Promotion Association (Japan), the number of visiting groups between the two sides for economic and trade cooperation and exchanges increased by 2.5 times. “When the epidemic first broke out, this platform was a window and bridge for Japan to donate medical supplies to Hunan,” Ogino said that under the framework of sister provinces/prefectures, Changde, Hengyang and Xiangtan from Hunan became sister cities with Higashiomi, Ritto and Hikone from Shiga.

2022 and 2023 respectively mark the 50th anniversary of the normalization of China-Japan diplomatic relations, and the 40th anniversary of the friendship between Hunan and Shiga. Ogino, 50, said that he will spare no effort to create new forms of friendly exchanges between Japan and China, and promote the friendship between Lake Dongting Museum and Lake Biwa Museum, by forming a normal exchange mechanism.